After Abraham died, his son Isaac became the owner of all his tents, sheep, cattle, camels, and servants. Now Isaac and Rebekah had twin boys. Esau was the oldest son and Jacob was the youngest. Being the firstborn, Esau would receive more of his father’s riches and God’s promises.

One day, Esau came in from hunting. Jacob was cooking some vegetable soup. “Mmmm, that soup smells good. I am very hungry, can I have some?” asked Esau.
“Sure, you can have the soup if I get your part of our father’s wealth”, Jacob said slyly. Esau did not value his birthright and the future blessing that it would bring. So, in haste, he gave them up for a bowl of soup.

When Isaac was old and blind, he called for Esau and said, “I want to give you God’s blessing before I die. Go hunting for an animal that is good to eat. Then prepare a tasty meal for me. When I have finished eating the meal, I will bless you.”

Rebekah heard what Isaac said to Esau. She made a plan for Jacob so that he could receive the blessing Isaac was going to give to Esau.
Isaac could not see, so Jacob pretended to be Esau and went to Isaac’s tent. “Is that really you, Esau? Come closer so I can touch you,” said Isaac. Jacob wore animal skins to make his skin feel hairy like Esau’s. In that way Jacob tricked Isaac into giving him the blessing planned for the firstborn.

Lesson 1: The Creation of the world 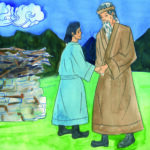