Soon the earth was full of people again. Everyone used the same language to talk. The people said, “Let’s build a city with a tall tower to show how wonderful we are.” These proud people thought they were greater than God.

God was not happy. So He confused their language. The people stopped building the tower and scattered to every land. And the city was named Babel, which means “confusion.”

From then on, people lived in different lands, each group speaking their own language. 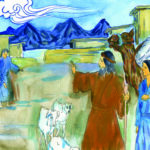